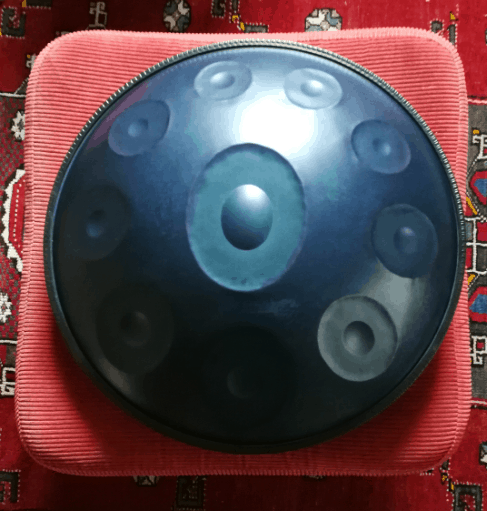 With a little finetuning help at some notes from MF. 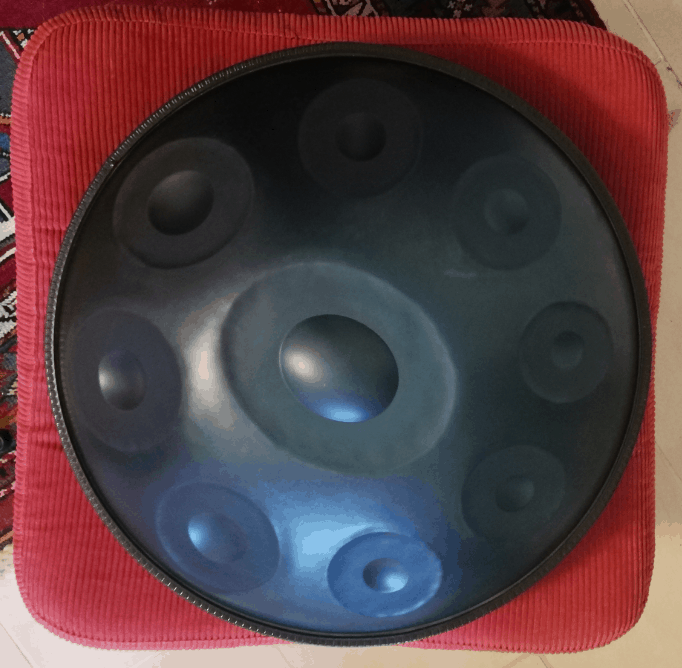 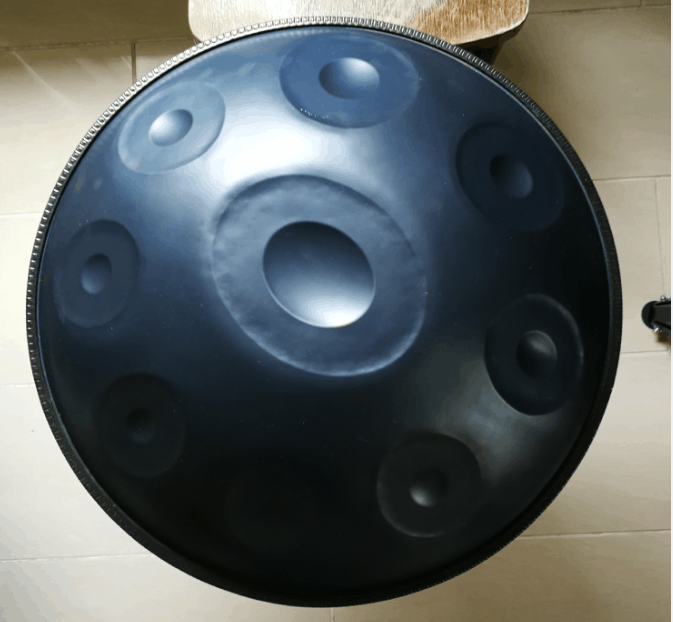 Video: the one on the left 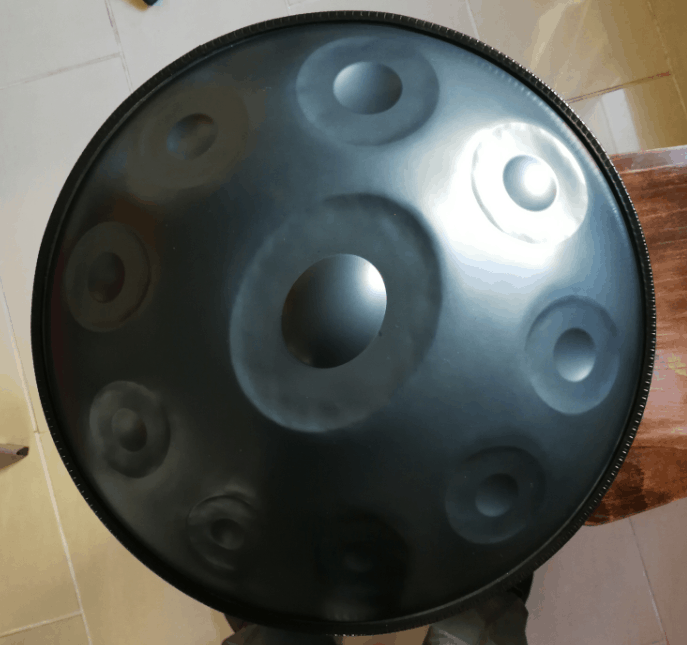 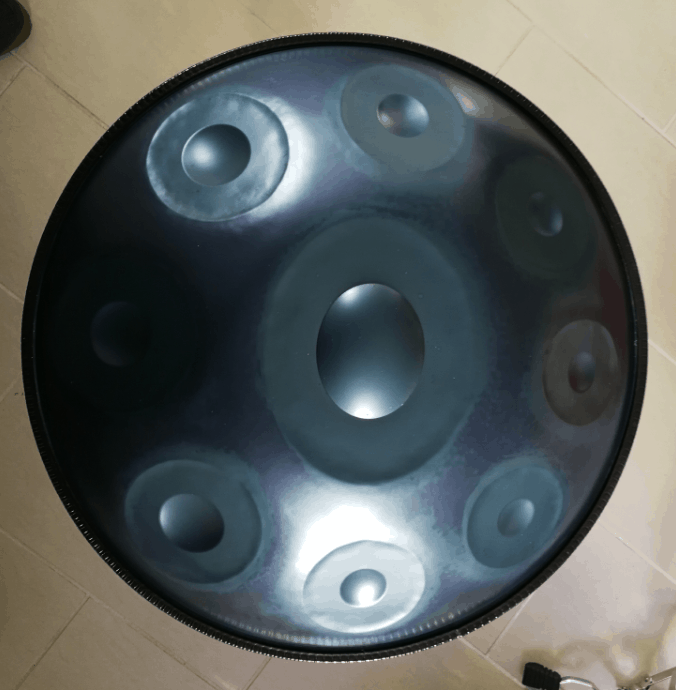 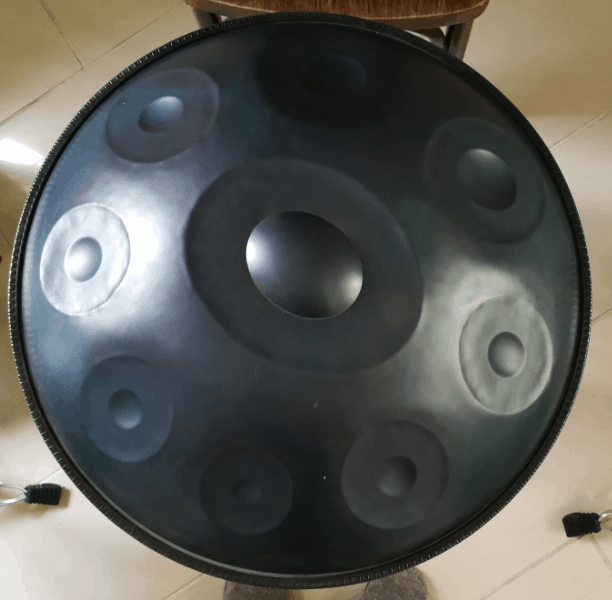 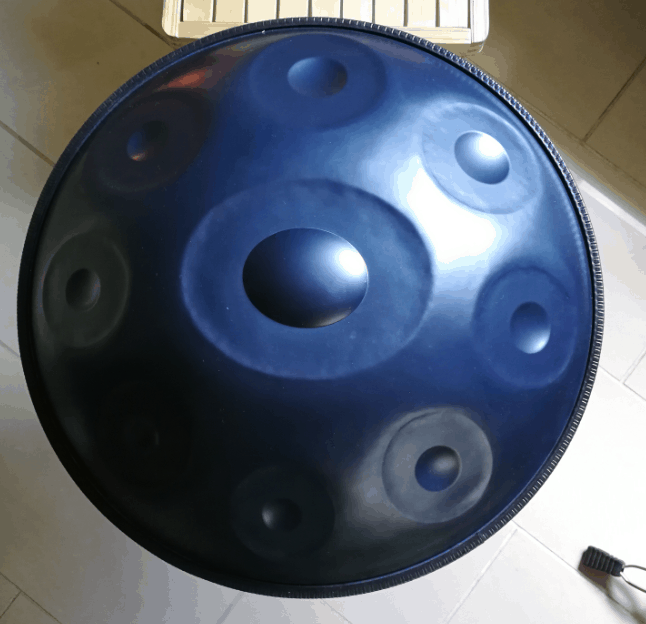 A PLV handpan series is recording one period of artistic creation. It is documenting a certain level of know how, tools and workflows and is defined by a set of criteria.

All the working steps (from layout, shaping, heat-treatment, tuning and overall design) will be as usual primarily done by me (Birgit Pestal). But I am getting some help for the upcoming instruments with cleaning, grooving and as well Workshop-and tool maintenance. Extremly rarely – maybe more often in the near future- i might also get help with finetuning for some of the upcoming instruments.

For the BINGEN handpan series “Co-Creation” will be a factor to rather join the series officially, then be entitled as “Prototype” – like it was handled in the earlier series DIOTIMA (2018). I was working all by myself mostly for more then a year till now – and enjoyable TEAMWORK is something i would like to see more often and therfor CO-CREATION will be a key criteria or approach to the upcoming working phase.

Compared to first handpan series entitled DIOTIMA I have changed or extended some important tools and am also able to make much more scales or also notes on a shell. Also my finetuning level raised and am able to maybe better stabilize the notes. Shouldernotes for centernotes are much more likely tuned, not always.

Also it seems some artists might join the team and we can start doing more design. There might be surfacedesigns coming up punctually for this series.

BINGEN soundsculptures are branded with a label inside, including scale info, printed on a paper with quite nice vintage-look.

How to place an “Order”

At the moment we do not provide a waiting list because this might create too much pressure. Desired scales can be placed via mail at getintouch@handpan.at. We inform you in case your scale is about to be build and also invite you later to have a look personally, but without any pressure to buy it.

We do not automatically offer free tuning service since the instruments are – once sold- under all possible conditions or can suffer also accidents. But we do recommend to have a look at the instrument at PLV after a year or two and if circumstances are allowing it, free or free donation tuning service is possible.

Please notice: In a best practice-sense we very much like to offer free tuningservice in case you want to sell your instrument.

Hildegard von Bingen was a famous german Benedictine abbess, writer, composer, philosopher, Christian mystic, visionary, and polymath. She is considered to be the founder of scientific natural history in Germany. She was so very much openminded, modern, rebellious and controversial, that she  was necglected to be called a saint during centuries (- till 2012, when finally her name was put on to the index of saints by the pope). During lifetime she was too popular to be ignored and had some really hard times as well. But she was also just too smart to be trapped by middleage inquisition.

ISCRETIO was one of her key terms. It means to find balance and health with the help of accurate understanding of self via meditation. According to Bingen, everyone who is seeking health will have to deal with his vices and transform them into virtues.

The tuning-work with the hammer, especially for the beginner (as which i have to consider myself after only 2 years of experience), has a lot to do with overcoming ones own vices, like impatience, greed, anger or also envy. There are so many traps, not only within the steeltuningwork.

Bingen would remind us of some virtues like:  Humility, Hope, Innocence, Celestial Love, Discipline? (the name is scratched out in the manuscript) Modesty, Mercy,  Discretion, Patience, Charity etc. According to Hildegard by strengthening our virtues we will be able to attend to the sort of “Symphony of Heaven”, which is also one of  Hildegard’s musical compositions. Ordo Virtutum is an allegorical morality play, or sacred music drama, composed 1151. It is the earliest morality play by more than a century, and the only Medieval musical drama to survive with an attribution for both the text and the music. Ordo Virtutum is about the struggle for a human soul, or Anima, between the Virtues and the Devil. (Source)

To my ‘surprise’ humour is not listed as a virtue by her it seems. Presumably there was not so much to lough back in the times.

I want to recommend engagement with Hildegards work for those, who are searching for some sort of guidance in a sort of spiritual crisis,  unrelated to what kind of instrument or handpan you might play or not. Her formulations are just not only honest, oftenly very smart and beautyful but many times also so very poetic.

“A human being is a vessel that God has built for himself and filled with his inspiration so that his works are perfected in it.”

Of course. It might be very possible to tune a note without overcoming vices i guess, but not so much for me it seems. It remains a big reminder of humbleness for me and also of individual physical borders for many of us, who are tuning steel.  Speaking for myself i can only handle this heavy work if i respect borders and also workout dilligently. I just place this information here discretly for the very few ones, who might read this closely – and are maybe thinking of  starting tuning by themselves. Just because a former science and IT women with very little biceps like myself can do it, doesnt mean it is easy at all XD. You gotta take good care and be aware of so many other factors, which have to do with balance. Also especially in the beginning it is important to ask for help before it cracks.

To me it is clear: i need to produce the pan accordingly with my physical health, and all this dream can end very abruptly, like it already did for many others, who enthusiastically started a “handpan-maker carrer”. A human body- as the steel which is to be tuned- will not forgive too many mistakes maybe. This is the reason also why security and ergonomy at work is the top priority at PAN LAB – and we try to ‘keep up the whiskers’, since optimism (humour as well as a side effect maybe) anyway seems to be the biggest duty  – and a virtue of its own – esp. these days and in all kind of questions related to our todays world. Which we need to protect surely more then ever.

I dedicate this series with great respect to Hildegard von Bingen and my Grandmother Anna Pestal.

“The soul is symphonic.”

1hr documentary about a quite revolutionary woman and amazing historical figure.

Quotes: “A contemporary model for inspiring young people to find their voice.” (..) “Her music is absolutley transporting” (…)” She is a complete innovator”.

“O trinity, you are music, you are life.”